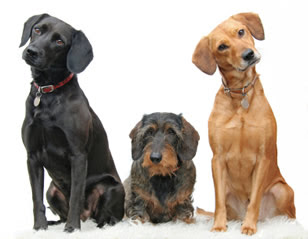 Have you ever wondered why your dog makes those strange muttering sounds at the dinner table? Or why he lays his ears back when confronted with a stranger?

Dogs speak to us, but in a different language.Unfortunately, there's no Rosetta Stone DVD to help us learn "dog talk." So, instead, we must analyze it ourselves, keeping it in context, avoiding asserting our own interpretations, and remembering that dogs were once wild animals.

The best way to start is to look to the dog's ancestor, the wolf. Wolves live in packs and dogs do the same with other pets in the household and their humans. There must be a leader of the pack and that leader should be you. And to be an effective canine leader, you need to know what your dog is trying to tell you.

Dogs communicate in many ways with each other, using verbal cues, body language and facial expressions. They also try to communicate with humans using these methods. Humans, of course, communicate with dogs with commands and phrases. Dogs can learn hundreds of human sounds but they can't string them together.

Thus, the need for short commands such as "Sit!" and "Come!" Many of our communication tools are lost on dogs, such as sarcasm (to indicate frustration) or closed body language (to indicate you're uncomfortable) or a look of surprise. So, to enhance our communication with our canines, we must learn to get back to the basics and speak "dog." 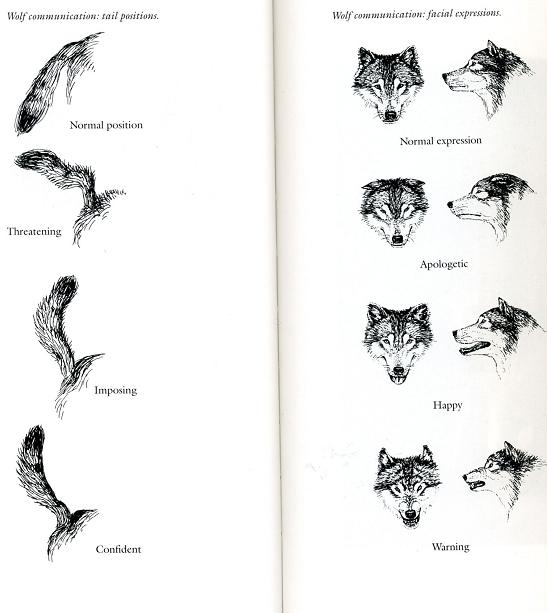 ·   Stance - rigid
·   Tail - straight up or out behind, very rigid
·   Ears - pricked up
·   Eyes - intense, focused stare
·   Mouth - lips are pulled back and some teeth show
·   Hackles - this is a line of hair that starts at the base of the neck and runs down the shoulders.
It is raised if a dog is feeling aggressive and lowered if he is relaxed.

·   Stance - lying down or standing without any alertness
·   Tail - up and wagging or lying naturally
·   Ears - at their normal state, depending on the breed
(A Terrier's would be up but relaxed, a Hound's would be down)
·   Eyes - normal pupil dilation, focused but not staring
·   Mouth - open and lightly panting or closed

This is an attempt to locate someone, perhaps you or the dog down the street.
When you leave for work, it's very possible your dog howls in an effort to get you back. When one dog starts howling in the neighborhood, usually many others join in - it's sort of like a conference call.

This means "back off." You'll see a dog growl when another dog gets interested in his food. Your dog may growl at a stranger he doesn't like or he may growl at you when you try to take his toy away. It's actually a very effective way of communicating and actually signals that you can probably negotiate that toy away. When a dog is in an aggressive stance and silent, there is the most danger.


The Grunt or Mutter

This is usually to indicate that your dog wants something. It's an interesting sound because it's almost manipulative - your dog knows if he barks, he'll get into trouble but the more subtle "grunt" might get him wants he wants. It is also heard when dogs greet other dogs or humans.

Dogs whimper when they're anxious or hurt. Sometimes they figure out that they get attention when they whimper and use this to their advantage.

This indicates frustration. They are in a sense "complaining" about something.

There are many different types of barks. A high pitched bark indicates excitement and happiness. A low pitched bark indicates aggression and is possibly a threat. Dogs bark to get attention, to respond to other dogs, to indicate that they're happy, and to alert their human to a problem. Unfortunately, your dog may detect a "problem" that you can't see or hear, such as a siren miles away or the neighbor's cat hiding in the tree outside the window.

Remember when Lassie sprinted off down the road to find help because Timmy had fallen into a well? Through her verbal cues and body language she was able to lead the rescuers back to the disaster scene. By understanding our dogs' language, we can better communicate with them and avoid common misunderstandings. And you can be assured that your dog isn't going crazy when he's muttering to himself all the time.

At The Grateful Dog Bakery, our priority is to serve your pet's nutritional needs by carrying an extensive line of natural and holistic foods, natural supplements, vitamins, tinctures and more: for both cats and dogs.

Our bakery features all natural freshly handmade canine treats and desserts. We want you to feel good about what you feed your pet... all of our ingredients are sourced from local farms if we didn't grow them ourselves on our own sustainable farm!